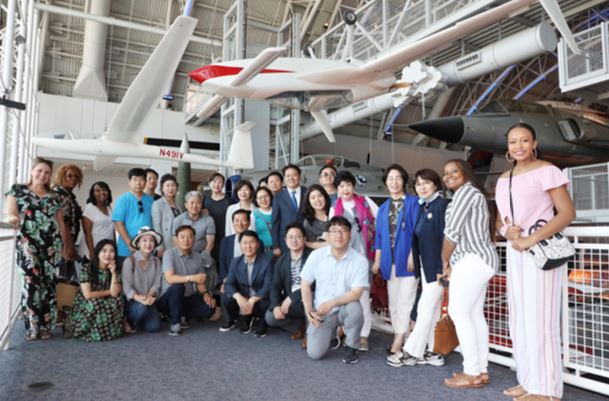 In celebration of a 30 year friendship, Sister Cities of Hampton and the Hampton City Council hosted a delegation of twenty-five officials from Anyang, South Korea led by Mayor Choi Dae Ho. The delegation visited the City of Hampton from June 30-July 3, 2019. In the spirt of celebrating this milestone, various educational, cultural, and economic development activities were planned. The delegation viewed the Apollo 12 Exhibit and IMAX 50th year Anniversary of the Apollo program, explored the “Space Habitat”, enjoyed a STEM demonstration, and viewed Hampton’s downtown harbor from the third floor observation deck at the Virginia Air and Space Center.

They also received a guided tour of the historic Memorial Chapel, Museum, and Legacy Park on the campus of Hampton University. A welcome program and dinner at the Historic Hampton Post Office was highlighted by the signing of a proclamation of continued friendship by Hampton Mayor Donnie Tuck and Anyang City Mayor Choi Dae Ho. Mayor Tuck stated, “We are most honored that Anyang City values the importance of promoting citizen diplomacy through an active exchange with us.” Since our relationship promotes common understanding and friendship of the people in both countries and respects the universal value of humanity, we provided the opportunity for open dialogue with and a tour of a local Sister Cities  rehabilitation facility. This allowed us to share some best practices in addressing the many challenges we both face as we endeavor to resolve issues surrounding our most precious population, the elderly. Erik A. Buckley, Vice President of Virginia Health Services stated, “Healthcare is an ever changing industry. The senior segment of healthcare is evolving faster than ever and the management of this care is critical to providing caring and professional services. We work to be at the forefront of the industry and are pleased to showcase what we offer in one of our communities.” Additionally, in support of Sister Cities of Hampton, the Peninsula Korean Association sponsored a dinner to honor the visiting Anyang delegation. Since 1989, the two cities have grown their friendship through delegation visits, teacher/student exchanges, executive government exchanges, honorary citizenships, and Korean American War Veteran Commemorations. This sister city visit will enrich the relationship between the two cities and its citizens while creating an even stronger bond for many years to come.

Stay up-to-date with Sister City announcements and events. Get our latest news by email by signing up