On October 8, 2020, the Daily Progress from Charlottesville, Virginia wrote about a new sister city friendship they were able to cultivate! Read the article below or see it on their website 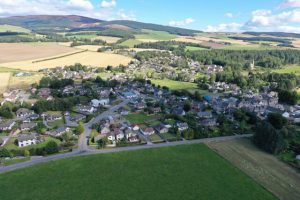 The Town of Stanardsville is gaining a sister—a sister city that is—the village of Tarland in Scotland.

Sister Cities International (SCI) was launched in 1956 to promote affiliations between cities in different nations to further international understand and develop continuing projects of mutual interest through meaningful exchanges, according to SCI. In Scotland, the process is called “twinning.”

The idea started for Greene when Anne and Roy Dye, executive director of Stanardsville Area Revitalization *STAR*, were vacationing in Scotland nearly a decade ago. During their trip, they came across the Aboyne Highland Games in the village of Aboyne, on the edge of the Highlands in Aberdeenshire, Scotland.

“We were particularly taken by a fiddling competition. We were very impressed with the talent of the fiddlers, these young kids,” Roy Dye said. “Afterward, we were staying at this charming little hotel in the (Tarland) town square and as we were eating dinner at the pub, Paul Anderson, who was the guy judging the fiddling contest, was at a table not far from us. We went over to talk to him and that’s how the relationship began.”

Paul Anderson is a world-renowned Scottish fiddler who has performed for the Queen of England, for Prince Charles’s 60th birthday and for Sir Sean Connery’s 80th birthday at the request of the Scottish government.

Dye said they learned that Anderson and his wife Shona performed in Virginia once every other year.

“We said, ‘Can we bring you to Stanardsville?’” Dye said. “We were just really amazed while touring Tarland with the similarities between the towns, with the mountains and rural landscape. So, Anne had the idea of pursuing the sister city relationship with them.

The Dyes became friends with the Andersons. The first time Paul Anderson visited Stanardsville was in 2013. While he didn’t perform a concert that year, Dye said several other musicians came together for a little jam session with him at the home of Holly Horan and John Pluta of Noon Whistle Pottery.

“Paul really enjoyed it and they enjoyed watching him fiddle and learning from him. It was quite amazing to see all that,” Dye said.

From that experience sprang the Malt and Moonshine concerts, a nod to the single malt Scotch Whiskey and the moonshine of Greene, sponsored by the Art Guild of Greene and the Greene County Tourism Council. The last concert was in November 2019 at Lydia Lodge.

“I had been emailing with Simon Welfare, who is the chair of the Cromar Community Council, which is as far as I can understand similar to our Board of Supervisors,” Dye said. “In 2018, the Stanardsville Town Council passed a resolution to make Anderson our ambassador to Tarland to get the project moving.

Dye said Anderson had the resolution framed and placed in the pub in Tarland called Aberdeen Arms. Then earlier this year as Shona Anderson began planning the annual food and music festival—which this year was held virtually—she decided to include a presentation on the possible twinning.

“At the Town Council meeting last month, they approved a letter renewing their invitation to Tarland to become a sister city,” Dye said. “The next step is for both communities to sign this resolution of agreement that we share with Sister Cities International to make it official.”

Stanardsville Mayor Gary Lowe discussed the idea in a conference call Sept. 29 with leaders in Tarland and will present it to the Greene County Board of Supervisors at the Oct. 13 meeting.

“People on their side were very excited and enthusiastic about the whole idea,” Dye said. “We’re thinking that initially, given the pandemic, we’d do virtual exchanges and the first being related to the schools, maybe like the old pen pals, but video exchanges instead. And we’ll just take it from there.”

Dye said one of the first steps is to establish a committee of volunteer community members to brainstorm the projects and get them off the ground.

“There are projects that will benefit students, but also exchanges about art, music and other topics,” he said. “One major connection between the two communities is that our musical heritage is Scots-Irish music because of the Scots-Irish who immigrated to Appalachia back in the 1700s and that influence on our music.”

“I think the Sister Cities effort to possibly ‘twin’ the Town of Stanardsville with the town of Tarland, Scotland, provides wonderful opportunities for the two communities to share and learn from one another,” he said. “I look forward to Mayor Gary Lowe’s presentation to the Board of supervisors on Oct. 13 where the greater Greene County community will have an opportunity to learn more about the ideas being discussed.”

“We look at this as helping to benefit tourism and economic development and put Greene County, put the Town of Stanardsville, on the map,” Dye said. “I just think it’s a great opportunity for the county, for the town and for everyone; I think it’ll be a mutual benefit to both.”

Anyone interested in helping with the partnership can call the town at (434) 990-6511. To listen to the Zoom supervisors’ meeting, visit greenecountyva.gov/government/local/board-supervisors and click the next agenda link on the left; it will contain the information to Zoom or phone in to listen to the meeting.

There are only 14 sister cities in Virginia, though most have more than one they sister with, according to the SCI website.

“Sister Cities International has worked to create global relationships based on culture, education, information and trade exchanges,” the website notes.

Alexandra has four partners, Arlington has five, Chesapeake has one, Hampton has four, Lynchburg has two, Newport News has three, Norfolk has 10, Richmond has five, Roanoke has seven, Suffolk has two and Virginia Beach has six. Locally, Charlottesville has partnerships with Pleven, Bulgaria; Besancon, France; Winneba, Ghana; and Poggio a Caiano, Italy; and Gordonsville is a sister city to Thoré-la-Rochette, France. For more information about Sister Cities, visit sistercities.org.